On this page you can see some of my work in more detail. It's most likely a process in chronological order.

For one of the last projects for school we had to design a game or application that could be used for in a museum.
I decided to work together with Jessey Novani https://www.jesseynovani.com/

Our idea was to work with face tracking and recognition, as we both knew a lot of applications use it to sense wether your happy, angry and show you those statistics. We however thought it would be cool to be able to use the facial recognition as a mechanic and so we came with the idea to alter the appearance of a natural scene with positive and negative feedback.

Jessey did a terrific job at connecting the animations and art I made to the facial recognition and in the end it worked as how we would like it to work. However due to not having the time in our project, we could not finetune it and train the facial recognition AI to such an extent that it worked fluently.
All in all, we created what we had planned and had some nice looking results in our Emotion Flora experience.

Used programs: Maya 3D, Substance Painter, Unity 3D, Adobe Photoshop
Here a video of the project and the flower being controlled by my face
Enjoy my amazing facial acting skills (Fun fact, I had to exaggerate for the recognition to recognize correctly)

For my internship at Imrpovive I worked on a character for a new multiplayer tech demo. The idea was to have two players controlling a character like you would normal, however the Goddess has an extra pair of arms, being cross controlled by the other player. So your own arm movements, get tracked and replicated on the second pair of arms on the other player its avatar.

I've built the Goddess from the ground up in maya, using no sculpting software which I find quite an achievement for my first time seriously making a humanoid character.

I've not contributed to coding the character, but did implement it in Unity to be VR ready in the end.

Used programs: Maya 3D, Substance Painter, Unity 3D, Adobe Photoshop
The first version of my first Internship period
One of the first VR controlled tests with the basic celshader in action
The improved version I made in my second internship period
I think why the second version turned out so much better, if you compare both, is mainly because of the texture work. The first version was with some more time pressure as the company needed it done and not as polished, as it were just tests at first. But the users liked the idea a lot and I was tasked to improve her the second period of my internship.

Her facial features needed to be improved upon, so instead of just using textures for the lips and nose, I modeled them. But overall the renewed textures improved her skin, make up, clothing, eyes and hair as well.

So comparing both versions, I'm quite proud of my first ever serious character which I've designed from the ground up (with style and art directed feedback) 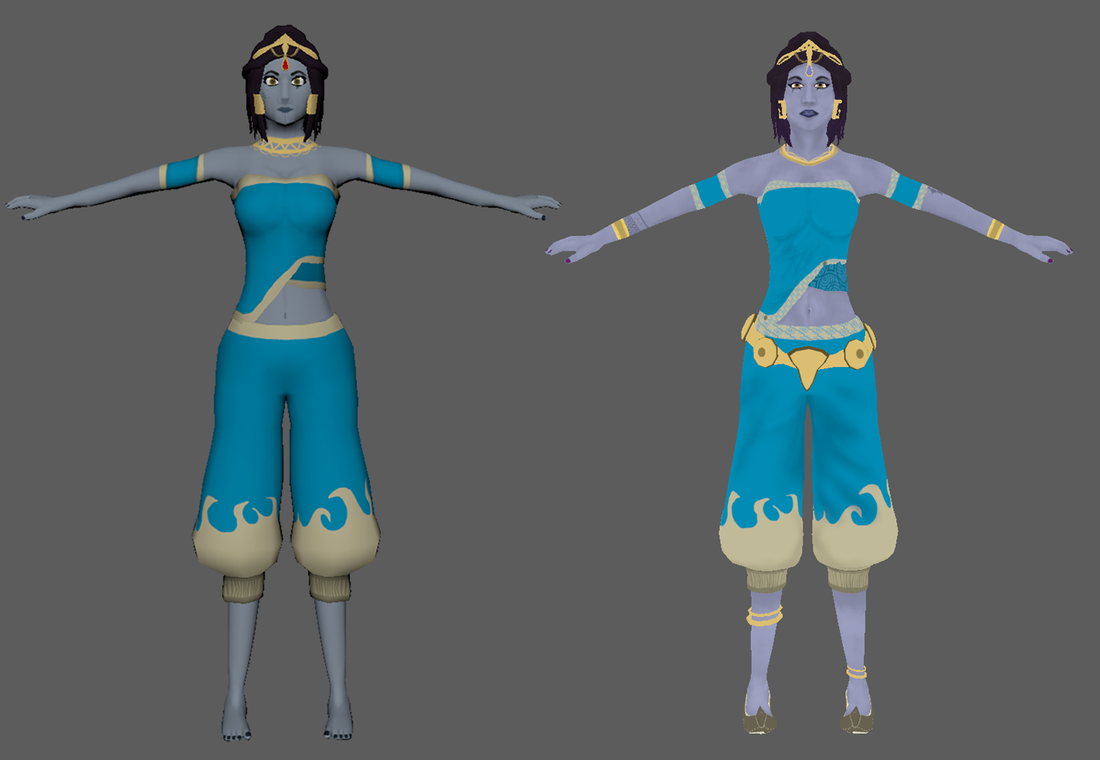 Here you can see of how the character is used in gameplay sense. Note that this video used the old version of Anamika

"The Etherial Crystal Glaive, a rare weapon that you won’t see very often around here. A true master is able to manipulate the weapon to shift and shape it to his or her advantage in battle."

A weapon I came up with while concepting. I got inspired by interchangeable weapons like in Bleach or Bloodborne and wanted to create something similar but in a fantasy style. It took me quite some time to actually come around and finish it, as I was not satisfied with the animations and texture at first.

Down the slideshow will be a video of it realtime in Unity added with some additional particle effects, and a sketchfab verson to view it somewhat easier.

For my internship at Improvive I helped to overhaul the previous characters for their game Hide & Freeze. First off I'd like to let you know that I DID NOT model or Rig these characters. The original models are entirely created by JBGARRAZA  and are available to get on the unity asset store:

The models will be used as playable avatars for Improvive's Hide & Freeze game.

My part in this project was to overhaul these bought characters so that they fit to the requirements of Improvive.
The work I did includes:

Slime Mine is the result of the Ludum Dare 42 GameJam, it was my first official gamejam game that I made together with:
In this project I was mostly responsible for the visuals of the minable environment, the pickaxe animation and the mid-size slime.

RoZoSho is a school project where we were signed up in groups to create a level for a made up game: RoZoSho (RobotZombieShooter)
I designed the layout of the map and created the arrival hall and the lounge mostly myself.

​The assets that I got by sharing assets with others are:

Deep Sea Trash Diver is a game I made for a Swedish Three Day Gamejam. I was 1 of the 8 people from my year to take part in it and had a blast of an experience.

The goal for the gamejam was to make a game with one of around 9 subjects from the United Nations. We chose the subject of Wildlife Degradation.

The goal of the game is to clean up the ocean floor and save its environment. The more you clean, the more fish appear and healthier the ocean will be.
​
The game is made in Unity and made possible with the incredible effort of my team:
The game is available to download on fabiovanhaarlem.eu/projects/deepseatrashdiver/

Worlds Well
"A Worlds Well. Legend says, some wells around Lyvinia open up portals to different, yet familiar and similar worlds.
How? That is yet to be discovered"

A personal project of mine.
A handpainted environment excercise to try and improve my texturing and environmental modeling.

Talith's Shrine
“A shrine dedicated to Talith, a mortal who surpassed the Archdemon Ruz’Azak by accepting a devilish fate”

I made this to train on my environment art, handpainting and lorebuilding.

A jump animation excercise with an animal by choice. I created a hybrid beast in the past that I wanted to create in low poly 3D and bring it to life with animation.